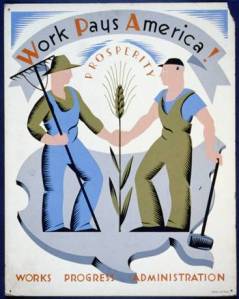 What's wrong with this picture?

Via Knitting Clio, we see that there’s a letter drafted by a group of prominent U.S. women’s historians to President-elect Barack Obama asking that his jobs-based stimulus package not replicate the same biases of the WPA.  Read on to see a draft of the letter, and the contact information for signing on:

Friends and colleagues,
Attached is a letter to President-elect Obama making a historical case for more attention to gender equity in the proposed stimulus package.  It is based on a draft circulated by Linda Gordon with input from several others.  We are sending it out to you now in the hope of gathering signatures from students of history–which we mean in the most inclusive sense.  To sign on, please send an email with your name and affiliation to Alice O’Connor:  aoconnor(ampersand)history(dot)ucsb(dot)edu.  Please respond NO LATER THAN 5pm (PST) Monday December 15.  We plan to send the letter on Tuesday, and then to have it posted on appropriate websites.  And DO forward to others.  With thanks in advance for your help,

As students of American history, we are heartened by your commitment to a jobs stimulus program inspired by the New Deal and aimed at helping “Main Street.” We firmly believe that such a strategy not only helps the greatest number in our communities but goes a long way toward correcting longstanding national problems.

For all our admiration of FDR’s reform efforts, we must also point out that the New Deal’s jobs initiative was overwhelmingly directed toward skilled male and mainly white workers. This was a mistake in the 1930s and it is a far greater mistake in the 21st century economy, when so many families depend on women’s wages and when our nation is even more racially diverse.

We all know that our country’s infrastructure is literally rusting away. But our social infrastructure is equally important to a vibrant economy and livable society, and it too is crumbling. Investment in education and jobs in health and care work shores up our national welfare as well as our current and future productivity. Revitalizing the economy will require better and more widespread access to education to foster creative approaches and popular participation in responding to the many challenges we face.

As you wrestle with the country’s desperate need for universal health insurance, we know you are aware that along with improved access we need to prioritize expenditure on preventive health. We could train a corps of health educators to work in schools and malls and medical offices. As people live longer, the inadequacy of our systems of care for the disabled and elderly becomes ever more apparent. While medical research works against illness and disability, there is equal need for people doing the less noticed work of supervision, rehabilitation and personal care.

We are also concerned that if the stimulus package primarily emphasizes construction it is likely to reinforce existing gender inequities. Women today make up 46 percent of the labor force. Simple fairness requires creating that proportion of job opportunities for them. Some of this can and should be accomplished through training programs and other measures to help women enter traditionally male-occupied jobs. But it can also be accomplished by creating much-needed jobs in the vital sectors where women are now concentrated.

The most popular programs of the New Deal were its public jobs. They commanded respect in large part because the results were so visible: tens of thousands of new courthouses, firehouses, hospitals, and schools; massive investment in road-building, reforestation, water and sewage treatment, and other aspects of the nation’s physical plant–not to mention the monumental Golden Gate and Triborough Bridges, the Grand Coulee and Bonneville dams. But the construction emphasis discriminated against women. At best women were 18% of those hired and, like non-white men, got inferior jobs. While some of the well-educated obtained jobs through the small white-collar and renowned arts programs, the less well educated were put to work in sewing projects, often at busy work, and African American and Mexican American women were slotted into domestic service. This New Deal policy assumed that nearly all women had men to support them and underestimated the numbers of women who were supporting dependents.

Today most policy-makers recognize that the male-breadwinner-for-every-household assumption is outdated. Moreover, experts agree that, throughout the globe, making jobs and income available to women greatly improves family wellbeing. Most low-income women, like men, are eager to work, but the jobs available to them too often provide no sick leave, no health insurance, no pensions and, for mothers, pay less than the cost of child care. The part-time jobs that leave mothers adequate time to care for their children almost never provide these benefits.

Meanwhile the country needs a stronger social as well as physical infrastructure. Teachers, social workers, elder and child-care providers and attendants for disabled people are overwhelmed with the size of their classes and caseloads. We need more teachers and teachers’ aides, nurses and nurses’ aides, case workers, playground attendants, day-care workers, home care workers; we need more senior centers, after-school programs, athletic leagues, music and art lessons. These are not luxuries, although locality after locality has had to cut them. They are the investments that can make the U.S. economically competitive as we confront an increasingly dynamic global economy. Like physical infrastructure projects, these jobs-rich investments are, literally, ready to go.

A jobs-centered stimulus package to revitalize and “green” the economy needs to make caring work as important as construction work. We need to rebuild not only concrete and steel bridges but also human bridges, the social connections that create cohesive communities. We need a stimulus program that is maximally inclusive. History shows us that these concerns cannot be postponed until big business has returned to “normal.” We look to the new administration not just for recovery but for a more humane direction—and in the awareness that what happens in the first 100 days and in response to immediate need sets the framework for the longer haul of reform.

Nicely done.  Who could argue with that?  (Aside from people who think raising any feminist issue is “divisive,” I mean?  And who really cares what they think?)  Spread the word, academic feminist bloggers (and other likeminded folk.)

9 thoughts on “Actual progress for the new Obama WPA?”