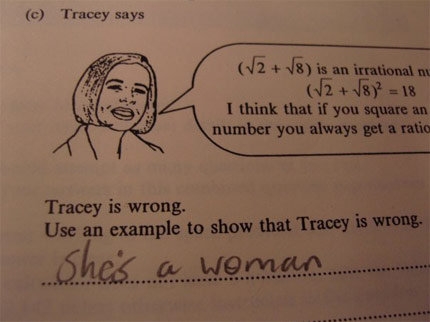 Hillary Clinton won the Kentucky primary yesterday by a whopping 35%.  (That’s right:  with Clinton’s 65 percent to 30 percent, Barack Obama’s percentage of the vote is lower than the gap by which he lost.)  Obama won Oregon by an impressive 16%.  Clinton won more votes and more delegates last night, and yet the headline in the print edition of the Denver Post this morning reads “Obama Edges Closer.”  (The linked on-line edition headline is similar:  “Obama edges closer to nomination.”)  WWTSBQ?

On page 6A, the Post runs an AP story reporting on the three presidential candidates’ fundraising in April:  Obama raised $31 million, Clinton raised $22 million, and McCain raised $18 million.  The headline for the story?  “McCain’s fundraising jumps; Obama still on a roll” (no link available at the Post’s website, but the AP story can be found here.)  Clinton’s surprisingly strong fundraising is disappeared by the headline, although the third paragraph of the story itself reads, “[t]he former first lady raised about $22 million, aided by a stunning $10 million haul raised in the two days following her April 22 primary victory in Pennsylvania. It was her second best fundraising month of the campaign.”  Speaking of money, how about this totally coincidental error in the LA Times today?  (Oops–it’s that darn math for girls again, which means that Clinton’s campaign debt is doubled, but her fundraising ignored!  WWTSBQ?!?)

Clinton has won seven out of thirteen nominating contests in the past two and a half months (Ohio, Texas, Rhode Island, Pennsylvania, Indiana, West Virginia, and Kentucky), all but one in medium to large states, all but two by impressive (9% or higher) margins, and a few in total blowouts (35% or higher).  Since becoming the frontrunner and more recently the “presumptive nominee,” Obama has won only six contests since February (Vermont, Mississippi, Wyoming, Guam, North Carolina, and Oregon–3 small states/territories, and 3 medium states).  Meanwhile, SUSA has a poll now that suggests (surprisingly) that Obama would lose North Carolina in November to McCain by 8 points, but Clinton would beat McCain by six.  WWTSBQ?

I guess all of those Obama supporters who panicked in early March were right to demand that Clinton drop out then after all, because she sure has been an a$$-kicking little-donkey-that-could this spring.  (Too bad she didn’t kick it up a notch a month earlier!)  It sure would have been nice for Obama if Clinton had forfeited and let them call the game for him at halftime.  If Obama is indeed the party’s nominee, I hope his losing streak ends in November.

(No Hillary-hating and nothing O/T in the comments, please!  The subject of this post is the media’s strange inability to permit Clinton’s winning spring to interrupt or revise the preferred narrative, which is that Obama is the winner no matter how often or big he loses, and Clinton is the loser no matter how often or big she wins.  The subject is not what a vile, disgusting, child-eating, warmongering, calculating, unscrupulous, vicious, shrewish, knee-capping, kitchen-sink throwing, ambitious, monstrous f*ck*ng whore you think Clinton is, m’kay?  So you can just keep that garbage a-festerin’ over on your own blogs.)

Clinton’s second great political mistake lay in how she dealt with Obama’s challenge. Sometime in December, having realized that Obama was going to be a genuine rival for the nomination, she and her campaign decided to go negative on him. They did the usual thing politicians do to each other: They ran attack ads taking his words somewhat out of context (Obama calling Reagan a “transformative politician”); they somewhat distorted old votes (voting “present” in Illinois on abortion bills); and they questioned old associations (Obama’s connection with real estate developer Tony Rezko).

John McCain and Mitt Romney were doing similar things to each other—and Obama did some of it to Clinton, too. But there a was difference between her doing this to Obama and McCain’s doing it to Romney—a difference that eluded Clinton, her husband, and her campaign staff.

Obama, too, was, and is, history—the first viable African-American presidential candidate. Yes, Hillary Clinton was the first viable female candidate, but it is still different. Race is the deepest and oldest and most bitter conflict in American history—the cause of our great Civil War and of the upheavals of the 1950s and ’60s. And if some voters didn’t appreciate the potential breakthrough that Obama’s candidacy represented, many in the Democratic primaries and caucuses did—and so did the members of the media and Obama’s fellow politicians. And as Clinton began treating Obama as just another politician, they recoiled and threw their support to him.

Now we know that at least according to Judis, 1) the media decided early on that Obama should be the winner because his campaign was “historical,” hers not so much, and 2) they punished Clinton specifically for, you know, running a political campaign.  She didn’t understand the special rules in play only for Obama!  And so the media decided to beat the bitch, when Obama looked like he might not be able to pull it off himself.  Thanks for explaining it all to us so clearly!

I’ll comment more later on the strikingly absolute hierarchy of race over gender in the “oppression Olympics” Judis plays here.  Let’s just note that at least half of all of the people who were enslaved and who suffered under Jim Crow and marched for Civil Rights were female.