Check this out from a story this morning about children and swearing that aired on NPR’s Morning Edition:

“When it comes to choosing words, our society has a bent toward novelty. Pinker explains we’re forever coming up with new ways to express that things are ‘good’ or ‘bad.’  He says there’s always a little “semantic inflation” going on.  For instance, if members of Generation X hear a song they like, they may say, ‘It’s awesome.’ A teen of today may say, ‘It’s bitchin’.’ If the song is lousy, they may say, ‘It sucks.'”

A teen of today may say, “it’s bitchin’?”  Maybe if he wanted to get beat up for sounding like his fortysomething parents and teachers.  (And, guess what?  The 80s sucked too.  Fer sure.)  I’m a colonial historian who spent the 1990s and most of the 2000s in the library, so no one has accused me of being too up to date on youth culture, but I think the kids of today have come up with language tics that are even more annoying.  What’s it called?  Oh, yeah–“texting.”  ZOMG!  Kewl.  L8tr!

Does no one remember that bitchin’ was a Valley Girl compliment, ca. 1982?  (“Encino is like so bitchin’!”)  And what about this classic band from the 1980s whose big hit was Bitchin’ Camaro?  How can American culture survive if we are so heedless about our own recent past?  Man, I so totally want to do some donuts on Steven Pinker’s lawn.  In this: 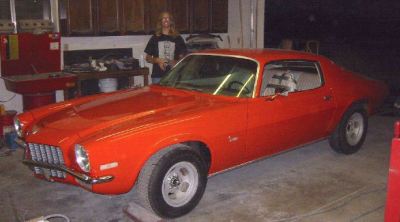