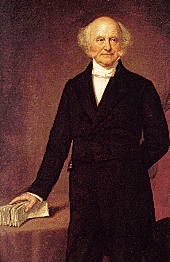 Go read this commentary by William K. Wolfrum over at Shakesville, a smart and spanky group blog.  He makes the fascinating point, long-overlooked by professional killjoys historians, that American-born presidents have been real losers compared to the British born ones.  “You need to go all the way to the eighth President – Martin Van Buren – to have a U.S. president that was born a bona fide American. And what is Van Buren best known for? The Panic of 1837 . . . . If Van Buren showed us anything, it was that true Americans were inept when it came to leading the country.”  (Kind of weird that his nickname was “The Little Magician,” no?  Compare that to “Old Hickory” or “Old Rough and Ready”–it just doesn’t inspire.)  Wolfrum makes exceptions for Abraham Lincoln and Franklin Delano Roosevelt, the other New York Democrat after Van Buren to be elected President.  As a professional killjoy historian, I’ve got a few quibbles with Wolfrum, natch:  The “no person except a natural born citizen” rule kept us from what would have been the early national nightmare of a President Alexander Hamilton, but we’ve amended the constitution considerably in the intervening 200 years since that would have been an issue.  And, you have to admit that this guy is definitely the second-worst President in American history despite being born in Massachusetts, which contrary to recent rumors, is not and never was a French colony.

On a related note:  HNN is once again asking us professionals to rate and rank George W. Bush’s presidency.  (Guess who beats out that guy in Historiann’s book?  One guess only!)  Anyway, if you want to submit your own answers, have at it.  I think we almost need to adjust the rankings for the newest soon-to-be ex-president to create five or six spaces in between him and the next-worst.  It almost makes me feel a little sorry for this guy–but not really all that sorry.  After all, until January 20, 2009, he’s Number One!

p.s.  Please keep sending me nominations for quality women’s history blogs–read the post below!  And as long as I’m sending hugs and kisses out to Shakesville, read this excellent post by Jeff Fecke on Geraldine Ferraro’s egregious comment that Barack Obama is somehow benefiting (unfairly!) from being a black man.  It’s embarassing, and just dumber than a sack of hammers.  Don’t go all Ralph Nader, Gerry, saying and doing dumb things that undermine your historic achievements and make us hate you in spite of them!  Apologize now!  UPDATE 3/12/08:  Ferraro bows out of the Clinton campaign.  Kind of a whiny letter, but brief!

0 thoughts on “Wanted: a non-U.S. American for President”