New campaign slogan:  She’s got the smarts and the lady parts! 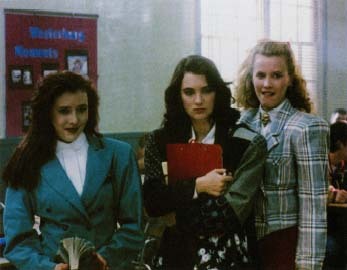 It’s caucus day here in my square state.  While I’m out doing my civic duty, here’s an interesting review by Susan Faludi of a new book called Thirty Ways of Looking at Hillary:  Reflections by Women Writers, edited by Susan Morrison.  (H/t to the lovely and talented Amanda Marcotte.)  It sounds like the book should be called Thirty Ways of Looking at Hillary by a Bunch of Jealous Heathers, plus a sensible essay by Katha Pollitt, although she’s voting for Barack Obama today.  What is it with Baby Boomers and their pathological envy of the Clintons?  I’ve always assumed that there was no small amount of class bias in the embarassingly obvious ressentiment of Maureen Dowd and the Washington establishment crowd.  Who did those hicks from Arkansas think they were, anyway?  (Well, Little Rock via those hick schools Wellesley, Georgetown, and Yale.)  Faludi’s review is a brief but brilliant foray into the gendered nature of Clinton-obsession, the Hillary version.  (Not that my generation should be let off the hook–although it would be nice if someone other than the obtuse Katie Roiphe were invited to comment, she who dismisses rape and Hillary Clinton because no one she knows has been raped or likes Hillary Clinton.  Well, no one I know likes Katie Roiphe, so there.)

The best part of the review is the introduction, where Faludi makes a counterfactual proposition that highlights the trivial issues the writers in this volume use to judge Hillary Clinton.  Faludi writes, “let’s imagine this book’s concept-30 well-known women writers talk about how they ‘feel’ about Hillary Clinton-applied to 30 male writers and a male presidential candidate. Adjusting for gender, the essay titles would now read: ‘Barack’s Underpants,’ ‘Elect Brother Frigidaire,’ ‘Mephistopheles for President,’ ‘The Road to Codpiece-Gate,’ and so on. Inside, we would find ruminations on the male candidate’s doggy looks and flabby pectorals; musings on such ‘revealing’ traits as the candidate’s lack of interest in backyard grilling, industrial arts and pets; and mocking remarks about his lack of popularity with the cool boys on the playground (i.e., the writers and their ‘friends’). We would hear a great deal of speculation about whether the candidate was really manly or just ‘faking it.’ We would hear a great deal about how the candidate made them feel about themselves as men and whether they could see their manhood reflected in the politician’s testosterone displays.”

Seriously people, get over it:  it’s not about you–not about your unresolved conflict with your mother, not about your discomfort with ambitious middle-aged women (even if you are one too), and not about your need to pretend you know which superior choices the Senator supposedly should have made instead at any point in her well-documented life.  Cowboy up.  Git ‘er done.

UPDATE:  Ruth Rosen, who will be appearing at the Berkshire Conference in June to speak on the topic of “Changes and Continuities in U.S. American Feminism, 1890-1990,” offers a different opinion in “Why Would a Feminist Vote for Obama?”

UPDATE III:  Via Feminist Law Professors, here’s a great commentary on the mysterious, inscrutable origins of Hillary hating at Feminist Philosophers.  I think they’ve gotten to the bottom of it!

11 thoughts on “Senatorella for President”